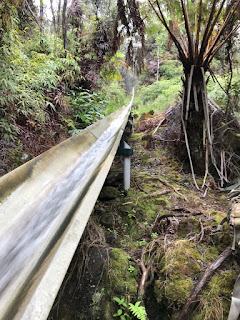 Yesterday's sold out Ka‘u Mountain Water Systems Hike was led by Kaʻu's new Planning Commissioner John Replogle, The Nature Conservancy's Shalan Crysdale, and Kaʻū Coffee Mill's Manager Lou Danielle.
They explained how the old sugar plantation around Pahala created a water system, now used for irrigating different crops from coffee to macadamia. In the future, the water running down the mountain could provide the energy to run a hydroelectric plant being developed by the Edmund C. Olson Trust, which owns Kaʻu Coffee Mill. That electricity could potentially run the mill and manufacture other value added farm products. 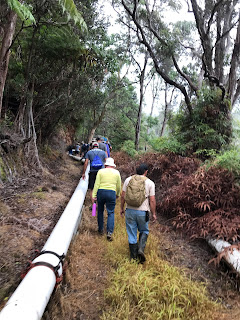 All the while, the area remains as one of the most pristine native Hawaiian rainforests. It is also a place where local hunters catch pigs and cultural practitioners gather native foliage used in ceremonies and in hula, including maile woven into lei.
The hikers left from Kaʻu Coffee Mill, riding through the coffee orchards, up the mountain and into the rainforest. They walked along trails from sugar plantation days.
Features of the hike included the sugar cane-era wooden flume system that used to carry cane to the mill. Also along the way were pipes carrying the water for irrigation and toward the hydroelectric plant.
The hikers had a chance to observe the natural area, with the sights, smells, and sounds of a mostly undisturbed rainforest.

Learn more about our upcoming events at kaucoffeefestival.com.
Posted by Ka'u Coffee Festival at 10:30 PM

The Ka'u Coffee Festival and pageant debuted in 2009 with much aloha from everyone involved. Each year, the entire community gets together and gives all they can to create a shared memorable experience; in time, money and resources. This year we hope to have you involved!

Join us and bring some Ka'u Coffee home with you to share the feeling of Aloha with your family and friends. With every passing day, cherry by cherry, bean by bean, cup by cup, smile and remember the beauty of Ka'u and it's people.

Mahalo for your support!